Hellooooooooo here is the birthday card I made for my mom.....inspiration originally started from this paper artsy video the technique didn't actually work out as intended think I needed a thicker layer of texture paste but anyway here is what resulted..... 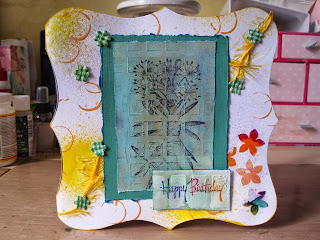 I tried the paper artsy technique through a square stencil with some texture paste and then painted it with fresco paints and stamped it with the flower. I then stamped a Happy Birthday using a rainbow ink pad, mounted it on some card and edged with ink. In the background I sprayed yellow dylusions and stamped some paint with a lid and stuck down some fibres and little flowers, and I also used alcohol inks on some acetate and punched out some flowers as well.
Posted by Vicky at 12:03 No comments:

Another letter rolls up on the alpha challenge

Letter G.....hmmmm what to pick.....had to have a look through the dictionary and the only word that inspired me was Gremlin and the only thing I could think of was the films of course! 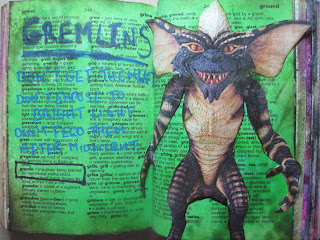 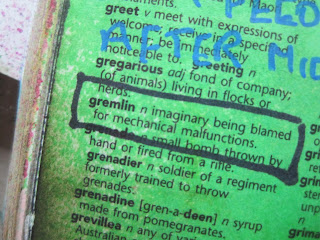 I used Dylusions on the background and a bit of distress and I printed off a picture of Stripe and cut it out and inked the edges and glued it down with mod podge, then I wrote on the "rules" hehe!
Posted by Vicky at 19:10 14 comments:

Here's a card I made for my uncle who collects glass bottles, which is great because it's another excuse to use my poison bottle stamps from Craft Individuals.

I used my ink blending mat to create a background with distress inks, then I used some gloss mod podge through a stencil then once that had dried used some more ink over the top with the mod podge acting as a mask. I stamped the bottles on some separate paper and coloured those with distress ink as well and cut them out, added in a little shading and stamped a birthday greeting and stuck that on too. 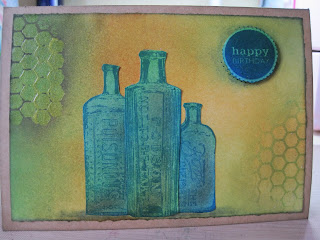 Ooooooooooooooooh another visit by a Great Tit to the bird house today..........wooooooooo!! He (or she) looks right at the camera I wonder what they make of it?!

Well as referred to in my previous post I was inspired to use my ink blending mat this weekend. I don't really know why but I'd only seen the blending mat used with a brayer and for some reason didn't really think about what else to do with it, anyway somehow I ended up on the SpodgeAway website watching all the videos and I was like woah why didn't I think to look on the Internet before...!!! The one where he uses just black ink to create a whole scene is amazing!!

So I think I will definitely need some of those stenscapes and in the mean time I've ordered some Christmas stencils so hopefully they'll arrive next week to play with. So out came the distress inks (not that they're ever really away!) and I started experimenting.

The background on this card was my first try, blending a couple of colours and also applying ink through a stencil - the lines you can see are from the edge of the stencil, but not too bad I thought. I then stamped on the Paper Artsy stamp and used some more distress ink off the mat with a craft nib and some water to highlight the flowers. Then I tore out the paper and highlighted the edge with walnut stain and stuck it on to a card. I stamped on a sentiment and then also the flowers round the edge which were in the same paper artsy set, not sure about the sentiment think it's personal impressions. Finally I just accented the edge of the stamped image with a gold gel pen. 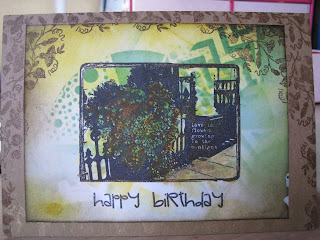 I love the colours on this one, I could use peacock feathers and picked raspberry on pretty much everything, I think there's a bit of evergreen bough in there as well, and Iced Spruce round the edge!! I again I blended the inks used cut n dry foam picking up the ink off the mat, it does seem to work much better than trying to go directly from the ink pad. I stamped on the tree, flowers and sentiment in black plus the other two in the same distress colours, and added a litter glitter to the black flower heads.

Before I stuck the main square down on the card I used the same distress inks through another section of the same stencil I was using before I think it's a crafters workshop one, to create circles in the background. The card itself is Craftwork cards and already came with the embossed edge on it. 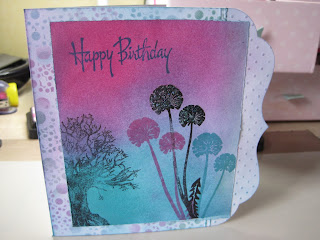 Hello, it's alpha challenge time again.......and it's letter Z....oooh not many to choose from, I wanted to do zombie but I couldn't think how to so I opted for zigzag instead. Now I've had a bit of an ink blending mat weekend (more on that in my next post!) and so I knew I wanted to use that somehow. The page was already half yellow from yo yo on the previous page and coincidentally I also used some zigzag washi tape to outline the definition that I had also used on my yo yo page as well.

I picked out a stencil with zigzags on it and I picked out three distress inks picked raspberry, peacock feathers and evergreen bough and set to work creating zigzags all over the page using ink off the blending mat and some squares of cut n dry foam with the ink on them. Then I wrote on zigzag and highlighted it with a white gel pen and that was pretty much it, simple but effective.

Here is the link to the Craft Barn 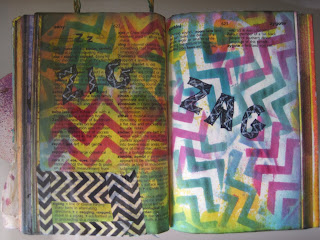 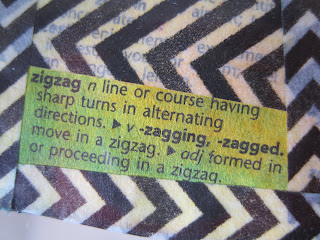