I made a little present for Lee.....again I used the Spotz Botz set to stamp out a robot on to a Dylusions, perfect pearls and swirly paint background and then I cut out the image and used a fine liner to fill in any parts I hadn't quite cut properly.

On the canvas itself I used a stencil and some texture paste which got slightly blue when it mixed with some ink on my craft mat, I left that to dry and then I sprayed on some more Dylusions, and I painted over the 3D area Paper Artsy metallic glaze which gives a lovely shiny effect that you can't really see in the photo. I glued on some micro beads and added a touch more ink around the edge. Although it didn't really want to dry properly probably because I'd made the surface shiny from the glaze so I probably should have used Staz on rather than distress but I've left it as it was for now.

Finally I drew on a few lines for the ground and then glued on the robot to make the finished piece. 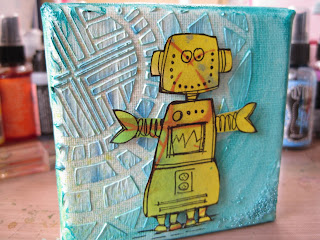 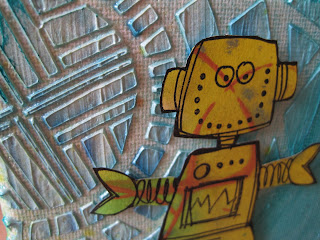