It's letter T this week in the Craft Barn's alpha challenge

Had a look through the dictionary and decided on Tessellated.....now what to actually tessellate......well I thought of Escher but decided fish etc. were a little too ambitious......and then I had a brainwave to use the letter T itself.

I cut out some little letter T's using some graph paper and experimented in getting them to tessellate, then I used one as a template to draw them on to the page, I had painted the page with Cool Peri paint dabber as a base to start off with as well.

Anyway getting the letter T to tessellate isn't as easy as you might imagine, I tried to copy the pattern I had made with my graph paper T's but then ran into a few problems which resulted in a lot of rubbing out and rearranging, finally I just about managed to fill up both pages - phew!!

I then drew over my pencil lines with a fineliner. I then drew and coloured a few of the T's and then I used a black OHP pen on the ones around the edge. 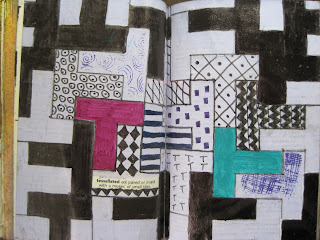 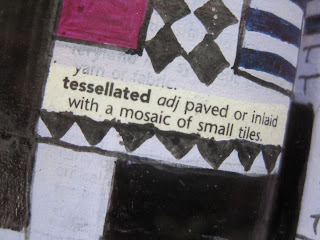